Tuesday’s race format will be a points race.  You will be given points for each lap you complete within 1 hour.  You only get points for the laps you finish in that 1 hour period so any laps completed after 1 hour do not count. You will keep track of your laps and report them at the finish to be added up.  You have 2 ascent options with a shared descent.

As always, headlamp and helmet are required.  If you have not signed up for your Utah Skimo Membership or signed BOTH the Brighton and Utah Skimo waivers, please do that before the race at http://utahskimo.org/memberships/.

We will be doing race checkin in the parking lot by Milly Chalet. The race will start at 7PM sharp so please arrive early for race sign in.

Post race awards will be at the 3rd floor of Alpine Rose at the main Brighton base. 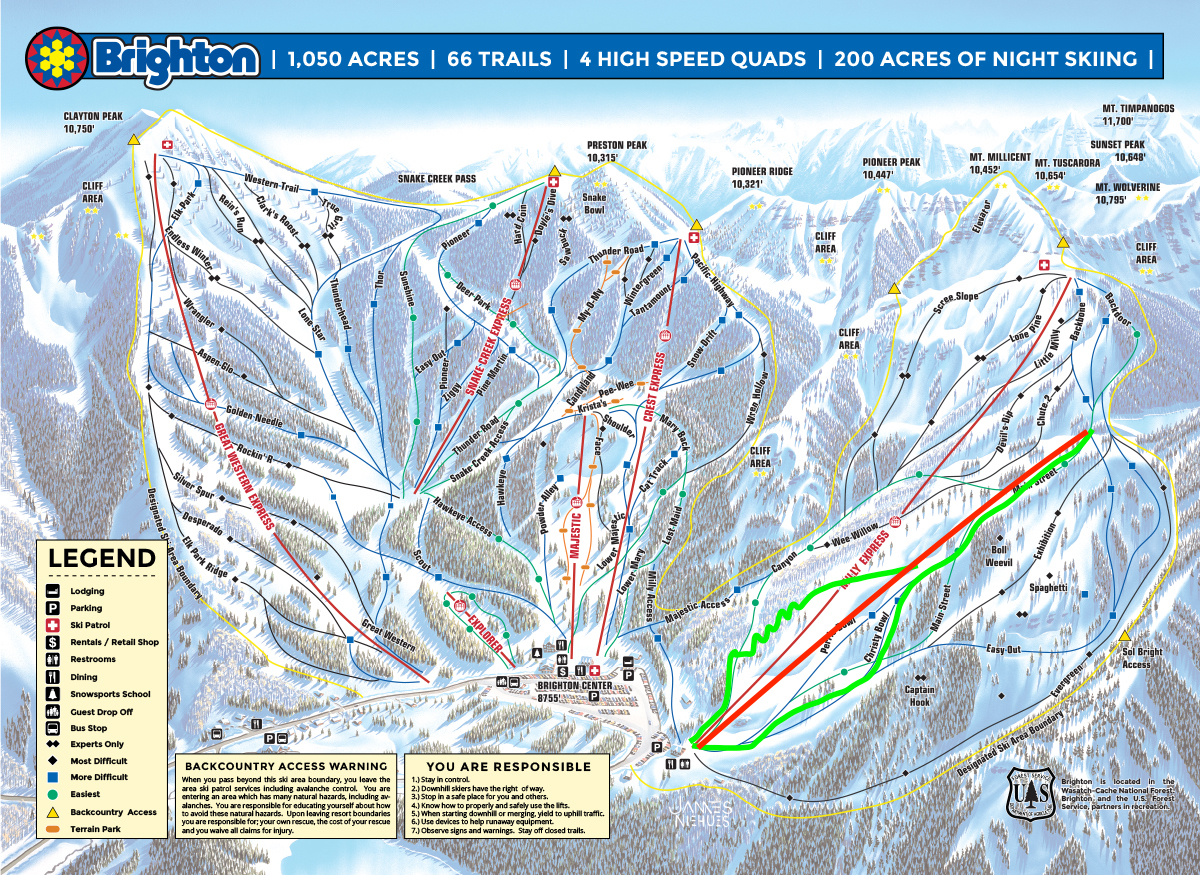 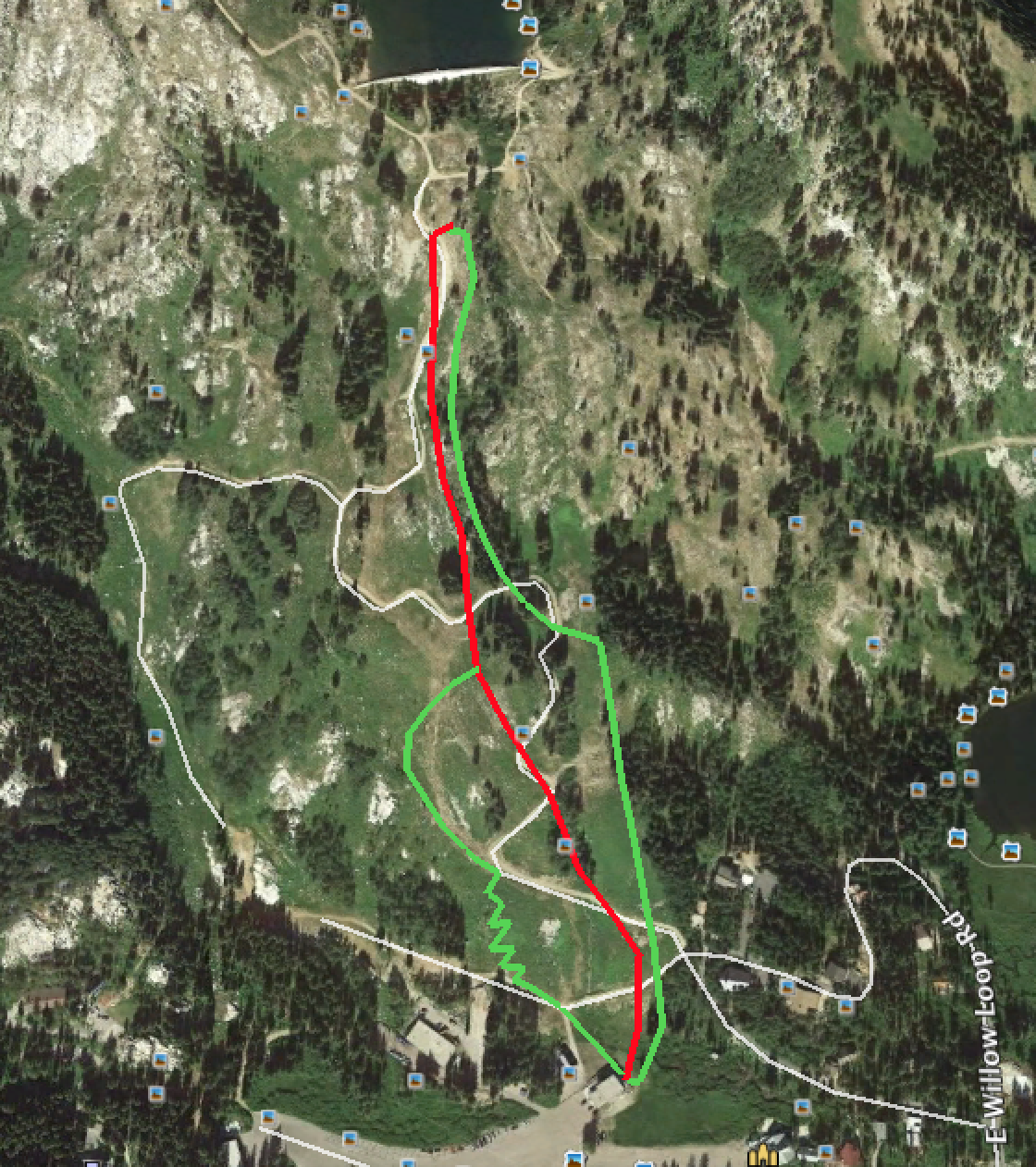 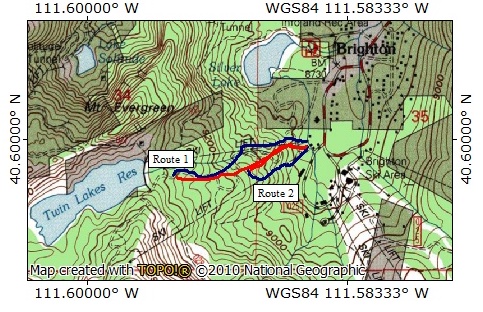 Thanks to Tuesday’s course setter Brent Mitchell for the race recap……..

The “last” citizen series race of the year, really? I couldn’t believe it was that time already, the Wasatch Skimo Citizen Series flew by in a blurry recollection of burning lungs, hasty head lamp descents, and great races at Brighton Ski Resort….

To finish off the season Chad B, Andy P , and myself and based on others feedback and since we hadn’t done a relay style race thought it might be nice way to finish off the season.  We wanted to create a course where people could observe the race unfolding, cheer on there partners, and heckle their competitors.

We put in a 500 foot vertical course heading  north from the base of the Snake Creek lift that ascended through the trees for a few hundred feet, a nice 100 foot booter to keep everyone honest, and then a screaming, icy bump run back down to the start.

Once the 100+ racers showed up the for the evening we split the group into spandex clad racers and others there for a good workout and sensible enough to wear normal ski attire.  The idea was for each team to complete 5 laps, 3 for one teammate and 2 for the other on this ski racing blind date.

We started the race with 50 participants toeing the line and dashing up the hill via headlamps.  It was great to see the headlamp snake head up the wooded hillside and then eagerly anticipate the torch light light parade start to trickle down the icy bump run back to the start.

The usual suspects  skidded into the relay and tagged there partners for lap two.  The race progressed in its this way for approximately an hour with everyone getting cheered in and out the the relay transition with equal amounts of enthusiasm for all who participated…

In the end  Tom G and Garrett narrowly edged out some other competitive teams for the win.

As per usual Andy and Jason did a good job of organizing the mob, giving pies to the winners and raffling off some amazing prices for the final raffle generously supported by the Wasatch Skimo Sponsors. We would like to thank all of the great sponsors – Ski Trab, La Sportiva, Backcountry.com, Voile, Momentum Climbing Gym, The Sport Loft, Gnarly Nutrition, and all of those that have been here during the year.  Please thank the sponsors any chance you get as this race series would not be possible without them.  Several pairs of skis were won, 1 year climbing gym passes, $500 at Backcountry.com, and a plethora of other awesome goodies.

The Happy Winner of the La Sportiva RSR Skis

As the night came to a close I think Jared Inouye summed it perfectly when he told us all that we were putting the Wasatch at the center of North American Skimo with our huge level of participation and psyche for the sport.  He also challenged the group to have someone from the Wasatch win the North American Championship race at the Powder Keg March 7-9.

Thanks to those four guys a few years ago who had the crazy idea getting this all going, and thanks to everyone who has contributed and participated this year.  Looking forward to next year already!!

We have had a very successful year of weeknight racing and it is our last official Citizen Series Race at Brighton tomorrow night (Tuesday, February 25).  There will be 1 more race at Wolf Mountain on March 18 and potentially a spring race and BBQ at Brighton (more details to come).   Thanks to everyone who has been coming out and especially all of the new faces that have started participating in the sport this winter.  We hope everyone has enjoyed the races.

Tuesday’s race is a great chance to get in 1 more race before the Powder Keg on March 7-9.  Use this as a chance to hone in those transition skills before the big weekend.

As the last official Brighton race……….

We look forward to seeing everyone on Tuesday.

We are excited to announce the the Logan contingency of Utah Ski Mountaineering is having their first Citizen Series Race on Friday, February 7.

They will be finalizing the details once this storm passes.

There will be a short clinic and race about an hour in length.  Afterwards we will adjourn to a nearby Logan establishment for food, drink, and socializing.

We will announce the location and start time soon via the Crowbar Facebook Page and and Twitter.

For future noticiations, please be sure to subscribe to the utahskimo.org blog.

Details for this Tuesday: http://utahskimo.org/2014/01/wasatch-citizen-series-skimo-race-6-28-jan/

With Outdoor Retailer behind us, it is time to get back to our normal Tuesday evening racing.  We will be back on Brighton this Tuesday (28 Jan) for race #6.

As always, please arrive early to sign-in.  Sign-in this week will be at the parking lot and we will meet at the bottom of the Snake Creek Express Lift for the start of the race.

As always a helmet and headlamp are required.

A few additional items you all may be interested in. 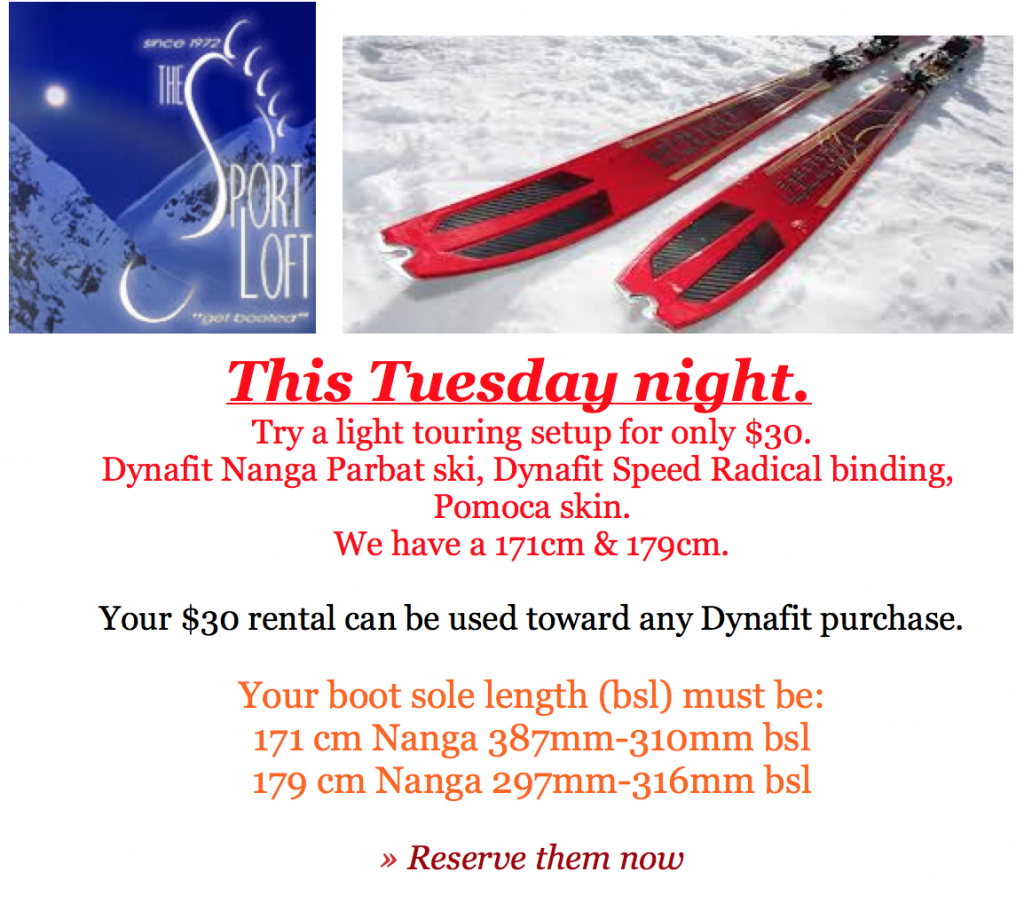 For the best experience call or e-mail The Sport Loft ahead.  By doing so we can have the gear adjusted and waiting for you.  We will be at the designated race meeting spot each race evening 30 mins. prior to the start.

We are working on more demos from CAMP, Pomoca, and Scarpa. 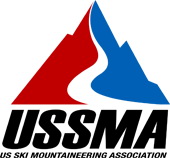 The first Citizen Series race at Wolf Mountain is Tuesday (14 January) at 7PM.  Come up to Wolf Mountain and check out the skimo race scene and continue to support the growth of skimo racing in the Wasatch.

As always, a helmet and headlamp are required.

Please arrive early and be ready to race at 7PM.

Award and libations will follow at a location to be announced at the start of the race.

The first Citizen Series race at Wolf Mountain is Tuesday (14 January) at 7PM.  Come up to Wolf Mountain and check out the skimo race scene and continue to support the growth of skimo racing in the Wasatch.

As always, a helmet and headlamp are required.

Please arrive early and be ready to race at 7PM.

Award and libations will follow at a location to be announced at the start of the race.

Several ladies beat the traffic and weather for the ladies SkiMo meet up on Thursday evening on a mix of gear- race, AT and Tele. One split boarder showed up but forgot her head lamp!

The group discussed the Brighton uphill policy, learning about the best  uphill track on Great Western to take at night or during the resorts open hours, groomer/ski patrol courtesy, and safety. Most importantly we got to meet new friends to play with in the mountains to share our experiences and learn from each other.

General interest was expressed in participating in SkiMo technique clinics, efficient skin removal, and also working on fitness to prepare for the PowderKeg (including going over the course in advance). Utah SkiMo will work on putting some clinics together for future Thursday nights and will post to the Utah SkiMo website. In the meantime, plan on the ladies meet up being every Thursday evening.

Brighton Ski Resort at the base of Milly, 6:30pm on Thursday evenings.

Park by the church (if possible try to car pool)

Don’t forget a helmet and headlamp- and you don’t need a beacon, shovel or probe.

If you have time- plan on grabbing a drink after the workout.

Please pass on to other ladies . If you have any questions email Emily at emily@wasatchpowderkeg.org

This message is only visible to admins.