Thanks to Tuesday’s course setter Brent Mitchell for the race recap……..

The “last” citizen series race of the year, really? I couldn’t believe it was that time already, the Wasatch Skimo Citizen Series flew by in a blurry recollection of burning lungs, hasty head lamp descents, and great races at Brighton Ski Resort….

To finish off the season Chad B, Andy P , and myself and based on others feedback and since we hadn’t done a relay style race thought it might be nice way to finish off the season.  We wanted to create a course where people could observe the race unfolding, cheer on there partners, and heckle their competitors.

We put in a 500 foot vertical course heading  north from the base of the Snake Creek lift that ascended through the trees for a few hundred feet, a nice 100 foot booter to keep everyone honest, and then a screaming, icy bump run back down to the start.

Once the 100+ racers showed up the for the evening we split the group into spandex clad racers and others there for a good workout and sensible enough to wear normal ski attire.  The idea was for each team to complete 5 laps, 3 for one teammate and 2 for the other on this ski racing blind date.

We started the race with 50 participants toeing the line and dashing up the hill via headlamps.  It was great to see the headlamp snake head up the wooded hillside and then eagerly anticipate the torch light light parade start to trickle down the icy bump run back to the start.

The usual suspects  skidded into the relay and tagged there partners for lap two.  The race progressed in its this way for approximately an hour with everyone getting cheered in and out the the relay transition with equal amounts of enthusiasm for all who participated…

In the end  Tom G and Garrett narrowly edged out some other competitive teams for the win.

As per usual Andy and Jason did a good job of organizing the mob, giving pies to the winners and raffling off some amazing prices for the final raffle generously supported by the Wasatch Skimo Sponsors. We would like to thank all of the great sponsors – Ski Trab, La Sportiva, Backcountry.com, Voile, Momentum Climbing Gym, The Sport Loft, Gnarly Nutrition, and all of those that have been here during the year.  Please thank the sponsors any chance you get as this race series would not be possible without them.  Several pairs of skis were won, 1 year climbing gym passes, $500 at Backcountry.com, and a plethora of other awesome goodies. 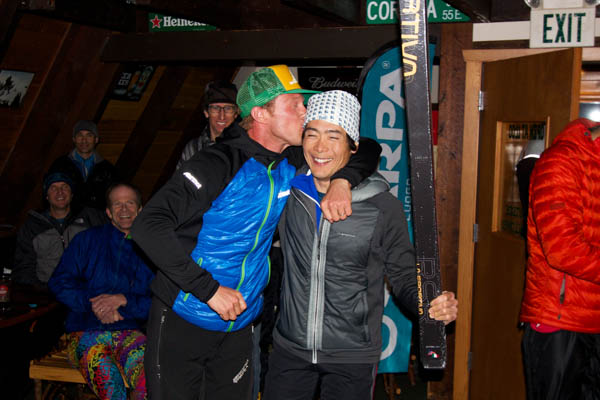 The Happy Winner of the La Sportiva RSR Skis

As the night came to a close I think Jared Inouye summed it perfectly when he told us all that we were putting the Wasatch at the center of North American Skimo with our huge level of participation and psyche for the sport.  He also challenged the group to have someone from the Wasatch win the North American Championship race at the Powder Keg March 7-9.

Thanks to those four guys a few years ago who had the crazy idea getting this all going, and thanks to everyone who has contributed and participated this year.  Looking forward to next year already!!